In 1899, Peter Kropotkin, anarchist geographer, detailed a vision of ‘the factory amidst the fields’ in which the ‘two sister arts of agriculture and industry’ are joined to meet the needs of all and to give each worker an opportunity for ‘brain work and manual work’. Never have more supportive material conditions prevailed for the realisation of Kropotkin’s vision. The advent of ‘personal fabrication’, presently most fully realised in the fab lab (fabrication lab), provides “widespread access to [the] modern means for invention” which have historically been limited to large capital. Additionally, Kropotkin’s vision is being made more achievable with the unprecedented developments in regenerative strategies for the production of food, fuel and fibre. The significance of this is, of course, not in the realisation of the ideas of a nineteenth century anarchist but in the present viability of a life within ecological limits. A life not of mere toil but for whole human beings. In this post, I hope to be able to share some of my excitement about combining fab labs with the farm and hacker spaces with horticulture.

What are Fabrication Labs? Fab labs consist of a set of machines and tools for making things. The number of things which can now be economically made in a small workshop is steadily increasing. As a character in Cory Doctorow‘s 2009 novel Makers says:

… any moderately skilled practitioner can build anything these days, for practically nothing … Every industry that required a factory yesterday only needs a garage today. — Tjan in Cory Doctorow’s Makers, p. 115 Each fab lab has a set of core machines:

The frequently asked questions page at the “Fab Central” website based at MIT contains an estimate of the set-up costs for basic machines and materials of around 60,000 USD. However, Kevin Carson, author of The Homebrew Industrial Revolution writes that:

Open-source versions of the machines in the Fab Lab have brought the cost down to around $2-5,000. — Kevin A. Carson, The Homebrew Industrial Revolution, p. 221

The machines listed above may seem like they are only for making electronic gadgets or plastic playthings but in fact these machines provide the basic technology from which most other tools and machines can be produced. For example, the roller crimper developed by the Rodale Institute for no-till mechanical weed control, the plans for which are freely available, could be cut out on the CNC machine ready for welding. This is of course already possible in many farm workshops. The fab lab becomes most useful where precision is critical. The ability to print circuits and to machine precision parts makes possible the manufacture of efficient, small scale equipment, sensitive instruments for monitoring or custom machines for new or niche crops. These possibilities are game changing for the production of food, fuel and fibre. As Carson writes:

The higher the fixed costs of an enterprise, the larger the income stream required to service them. That’s as true for the household microenterprise, and for the "enterprise" of the household itself, as for more conventional businesses… innovation in the technologies of small-scale production and of daily living reduce the worker’s need for a continuing income stream. It enables the microenterprise to function intermittently and to enter the market incrementally, with no overhead to be serviced when business is slow. The result is enterprises that are lean and agile, and can survive long periods of slow business, at virtually no cost; likewise, such increased efficiencies, by minimizing the ongoing income stream required for comfortable subsistence, have the same liberating effect on ordinary people that access to land on the common did for their ancestors three hundred years ago. — Kevin A. Carson, The Homebrew Industrial Revolution, pp. 1-2

Blair Evans of Incite Focus, whom I met at IPC10 in Jordan, introduced me to the sloganistic phrase “move bit not atoms”. This phrase captures another energy (and cost) saving. Where we’re talking about atoms, distance is energy. Bits, however, are trivial to move in comparison.

To summarise, this kind of networked fabrication capacity

Under the heading of polymarketing, Darren includes farm succession, processing, distribution, marketing and everything which puts producers in control of all the things which makes a farm profitable. Networked fabrication will become an essential element of producer control and as such must be considered an essential part of polymarketing. It may even deserve its very own place on the scale because of the dramatic implications it has for other elements. Factor-e-Farm is one place in which some of these implications are being worked out. This farm is the site of Open Source Ecology‘s project called the Global Village Construction Set. The project aims to produce 50 machines for village scale development. Several prototype machines, all with open source specifications, have been built already, including a compressed earth brick press and tractor. Like the fab lab, OSE aims for their machines to be able to be produced from a minimal set of self-replicating machines. Listening to Frank Aragona’s interview with Marcin Jakubowski in 2008 was what first interested me in the possibility of low energy, high tech fabrication within regenerative design. I liked the notion of permafacture, which Marcin spoke of and which Vinay Gupta is supposed to have coined. Since that time, OSE has proved that this idea has legs and the project is steadily gaining momentum.

The Necessity of Sharing

There are conditions for a kind of networked fabrication which is consistent with permaculture and with Kropotkin’s vision. The necessity of sharing perhaps encompasses the major conditions:

The sharing of knowledge, as represented by the philosophy of ‘open source‘, ‘free culture‘ and appropriate licensing such as the GNU GPL, creative commons or copy left is what allows the rapid spread and innovation of technologies for a life within ecological limits. This way of holding culture in common is also what allows for the fabrication of useful machines and tools at very low cost.
Kropotkin writes:

In proportion as technical knowledge becomes everybody’s virtual domain, in proportion as it becomes international, and can be concealed no longer, each nation acquires the possibility of applying the whole variety of her energies to the whole variety of industrial and agricultural pursuits. Knowledge ignores artificial political boundaries. —Peter Kropotkin, Fields, Factories and Workshops, p. 25

Those who dream of monopolising technical genius are 50 years behind the times. The world — the wide, wide world — is now the true domain of knowledge. — Peter Kropotkin, Fields, Factories and Workshops, p. 48

It is almost as though he could foresee the significance of strings of the letter ‘w’ for the sharing of information. Sharing technical information is essential to low cost networked fabrication. Neil Gershenfeld of the Centre for Bits and Atoms at MIT recognised this in rural India where he was assisting with fab lab development:

The proviso of personal fabrication for those billion users is in “open source” hardware, meaning that they can collaborate on problem solving by sharing files for a project such as the development of an improved agricultural instrument or a healthcare sensor.” — Neil Gershenfeld, Fab, p. 49

As we develop vital solutions we must be willing to share what we are able of the associated vital information. This is not charity, it is a practice ultimately beneficial to our own capacity to make use of other people’s improvements on our work and the obligation implicit in our making use of the knowledge of all who have come before us. Colin Ward first re-issued an edited edition of Kropotkin’s Fields, Factories and Workshops in 1979 under the title Fields, Factories and Workshops Tomorrow because Ward saw that this vision was becoming ever more realisable even if Kropotkin’s thesis of its inevitability was wrong. More than ever we know that decentralised, human, ecologically regenerative work and life is not inevitable. That there are powerful forces working against just these things for the profit of a few also becomes ever clearer. Kropotkin recognised this even if he could not see that he wrote during the beginning stages of the concentration of capital in trans-national corporations. He wrote:

Of course, as long as society remains organised so as to permit the owners of the land and capital to appropriate for themselves, under the protection of the state and historical rights, the yearly surplus of human production, no such change [the integration of industrial and agricultural, manual and brain work] can be thoroughly accomplished. — Peter Kropotkin, Fields, Factories and Workshops Tomorrow, p. 26

This element of Kropotkin’s vision cannot be forgotten and calls for communal, cooperative approaches to the business of production and consumption and for just the kinds of resilient and agile farm businesses which networked fabrication facilitates. These qualities will assist producers in weathering the storm against larger corporate interests and support the vital experimentation required to move towards regenerative production systems.

The development of post-industrial fabrication, the hacker movement and movement for free culture are well under way. So also, developments in regenerative modes for producing food, fuel and fibre are proceeding rapidly. There is a tremendously productive space in which geeks and gardeners, fab folk and farmers might meet for mutual benefit and for the benefit of humanity. Kropotkin saw the potential for ‘the factory amidst the field’ in 1899. Today, the fabricator’s and the biohacker’s lab in garage and garden and on the farm will enable the always-inventive gardener and farmer to gain access to the means of invention which have hitherto been out of reach and so also limited the capacity for a truly harmonious relationship with the land and for cooperative and communal production.

Below are some starting points so you can get collaborating: 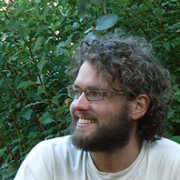