There is now widespread recognition that a rapid shift from industrial monoculture to sustainable farming is needed to save the climate and guarantee food security for all. A rapid and significant shift from conventional, industrial, monoculture towards sustainable production systems is needed, says a new discussion paper from the United Nations Conference on Trade and Development (UNCTAD) [1]. This follows on the heels of a report by the UN Special Rapporteur on the Right to Food, Olivier de Schutter, demonstrating that agroecology or eco-farming can double food production in entire regions within 10 years while mitigating climate change and alleviating rural poverty [2]. These two new papers confirm what we have found in our comprehensive report released in 2008 [3] (Food Futures Now: *Organic *Sustainable *Fossil Fuel Free , ISIS/TWN publication), which supports our call for a global shift to non-GM sustainable agriculture in 2003 [4] (The Case for A GM-Free Sustainable World, Independent Science Panel Report, ISIS publication).

De Schutter’s report Agro-ecology and the right to food presented to the UN Human Rights Council on 8 March 2011 draws extensively on recent scientific literature to support its conclusions [2]:

"Today’s scientific evidence demonstrates that agroecological methods outperform the use of chemical fertilizers in boosting food production where the hungry live – especially in unfavourable environments."

"Agro-ecology mimics nature, not industrial processes. It replaces the external inputs like fertiliser with knowledge of how a combination of plants, trees and animals can enhance productivity of the land,” De Schutter told Stephen Leahy of IPS (Inter Press Service) [5], “Yields went up 214 percent in 44 projects in 20 countries in sub-Saharan Africa using agro-ecological farming techniques over a period of 3 to 10 years… far more than any GM [genetically modified] crop has ever done.” Other recent scientific assessments have shown that small farmers in 57 countries using agro-ecological techniques obtained average yield increases of 80 percent. Africans’ average increases were 116 percent.

De Schutter criticised efforts by governments and major donors such as the $400 million Alliance for a Green Revolution in Africa (AGRA) to subsidise fertilizer and hybrid seeds: it produces quick boosts in yields but are not sustainable in the long term [5].

Malawi is touted as an AGRA success story by funders such as the Gates Foundation and the Rockefeller Foundation that have massively subsidised chemical fertilizers for a corresponding improvement in food production. But the country cannot afford to continue those subsidies and is shifting to agro-ecology. “The [Malawi] government now subsidises farmers to plant nitrogen-fixing trees in their fields to ensure sustained growth in maize production,” he said.

The dominant view of agriculture is the industrial approach to maximise efficiency and yield. That approach is utterly dependent on cheap fossil fuels and never having to be held accountable for environmental degradation and other impacts. “It is fair to say that between 45 and 50 percent of all human emissions of global warming gases come from the current form of food production,” De Shutter said.

Greenhouse emissions from industrial agriculture are more than just carbon dioxide from burning fossil fuels. They include vast amounts of the super greenhouse gases like methane from intensively raised feedlot animals, and nitrous oxide from chemical fertiliser. Add deforestation, mostly done to increase farmland or plantations, and that’s around a third of all emissions. Now, pile on the emissions from food processing and long distance transport of foods around the world, and it comes close to half of all human-caused emissions.

The food system doesn’t have to be a major source of emissions, the problem is just the way we have designed it around cheap fossil fuel energy, De Schutter said. Eco-farming can produce more food for the world’s poorest, while also reducing emissions. It can even store carbon in the soil.

“We won’t solve hunger and stop climate change with industrial farming on large plantations. The solution lies in supporting small-scale farmers’ knowledge and experimentation, and in raising incomes of smallholders so as to contribute to rural development.” De Schutter said [5]

He called on the research community, including centres of the Consultative Group on International Agricultural Research and the Global Forum on Agricultural Research to increase the budget for agroecological research at all levels: from design of sustainable and resilient agroecological systems in the field, to impacts of various practices on incomes and livelihoods in farm and communities, and impact on socio-economic development at national and sub-national levels of participatory scaling-up strategies and public policies [2].

Furthermore, projects should be assessed on the basis of a comprehensive set of performance criteria (impacts on incomes, resource efficiency, impacts on hunger and malnutrition, empowerment of beneficiaries,etc.), and not just in terms of classical agronomical measures.

UNCTAD’s discussion paper [1] reinforces de Schutter’s report. It emphasizes that climate change could reduce total agricultural production in many developing countries by up to 50 per cent in the next few decades, in particular in South Asia and sub-Saharan Africa, simultaneously as the population there is projected to nearly double. Import is impracticable on account of low purchasing power and expected food price increases.

Currently, agriculture’s share in global GDP is about 4 per cent, but it contributes to about 13–32 per cent of global greenhouse gas (GHG) emissions, depending on whether direct contribution is counted only or indirect contributions from land-use changes, land degradation and deforestation are included. Thus, GHG emissions from agriculture and forestry are higher than from the key energy-intensive industrial sectors such as iron and steel, cement, chemicals or non-ferrous metals, and even surpass those of the global energy sector. Under a business-as-usual scenario, agricultural GHG emissions are predicted to rise almost 40 per cent by 2030. Further industrialization of agricultural production cannot but reinforce this trend, and are therefore steps in the wrong direction.

From greenhouse gas source to sink

If appropriately transformed, agriculture can be turned from being a climate-change problem to becoming an essential part of its solution. In fact, many sustainable production practices can be climate neutral or even become a net carbon sink (as we have previously shown in ISIS’ report [3]). A much more holistic approach is required that not only sees the farmer as a producer of food and agricultural commodities, but also as manager of sustainable agro-ecological systems [1]. The required transformation is much more profound than simply tweaking the existing industrial agricultural systems.

The UNCTAD discussion paper [1] called for a transformation from a high input monoculture to a diverse mosaic of ‘regenerative’ systems (which some of us have been referring to as systems based on the ‘circular economy of nature’ [3, 6, 7] (Sustainable Agriculture, Green Energies and the Circular Economy, SiS 46; Sustainable Agriculture Essential for Green Circular Economy, ISIS Lecture).

To profoundly transform agriculture towards a mosaic of sustainable (regenerative) practices takes “bold and visionary policy measures,”  the UNCTAD paper said [1], “governments in developing countries can move ahead with effective measures at national level if international-level progress is slow”, as  “agricultural mitigation and adaptation have low or negative costs,” drawing on local resources, knowledge and skills. However, a considerable increase of public expenditure for agriculture is needed, with extension education and services and the improvement of local infra-structure aimed at empowering in particular small-scale farmers to significantly increase total productivity of the new regenerative agricultural systems.

Irrefutable evidence in favour of eco-farming

“The evidence [in favour of sustainable eco-farming] is irrefutable. If we can change the way we farm and the way we produce and distribute food, then we have a powerful solution for combating the climate crisis,” said Henk Hobbelink, coordinator of GRAIN to IPS [5]. GRAIN, an international non-governmental organisation, produced a report in 2009 showing that industrial agriculture was by far the biggest source of greenhouse gases.

“There are no technical hurdles to achieving these results [of doubling food production with eco-farming], it is only a matter of political will,” Hobbelink added. Trade, economic and agricultural policies are all skewed in favour of the current industrial food production system. And many of those policies are pushing small farmers – the ones who are by far the most efficient in terms of carbon emissions and energy use – off the land.

De Shutter said the techniques and benefits of agro-ecology are now well established [5], so his role is to push governments to change policies and support the transformation of food production.

“Private companies will not invest time and money in practices that cannot be rewarded by patents and which don’t open markets for chemical products or improved seeds,” De Shutter said. “If we don’t radically transform the direction of the global food system, we will never feed the billion who are hungry…Nor will we be able to feed ourselves in the future.”

We agree, for reasons detailed in our previous publications [3, 6, 7].

Smart Planning for the Global Family

Why You Should Grow and Produce Your Own Food 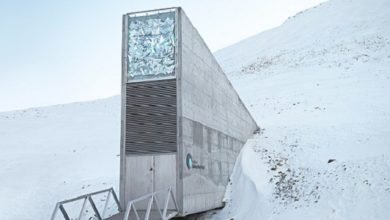 Beware the Corporate Takeover of Seed Under Many Guises

Life in a ‘Degrowth’ Economy, and Why You Might Actually Enjoy It