Written by Alex Metcalfe. Photo credits to Alex Metcalfe, Asiya Brock, Helen Evans and Houssa Yacoubi. Part III of a series. Be sure to check out Part I and Part II. Journey to Igourdane: Large communal extended family home.
Only the part on the far right is now inhabited.

The days on the course were spent going through the theory and wandering about on the farm trying to apply it to surrounding landscape. Every now and then we might be given some mint tea, batboot and olive oil. Lunch was eaten at the spring, usually a tagine or couscous and salad eaten with bread. The day of the souk we had an outstanding dish of sardine meatballs in a very tasty stock.

We were so lucky to get such a rich and diverse bunch of students. The knowledge and experience they contributed to the course was truly invaluable. I don’t think Dave would argue that we learned something new every day through our exchange through the students.

The sessions were structured along the sections of Bill’s A Designers’ Manual although there was a certain freedom to discuss and reinforce the material we were going through. Many thanks go out to the multilingual students who helped us clarify the material at each stage to make sure everyone understood it before we moved on. On the Sunday in the middle of the course some of us chose to visit the Cascades du Ouzoude, a system of waterfalls a few windy mountain kilometres away.

The visit to the falls provided us with a good break from the course. The first week of a PDC is always going to be intense with so much to take on board and comprehend. We spent the day taking full advantage of the relaxed pace. Rainbows, thundering water and Barbary apes all blessed our visit. The Cacades du Ouzoude is part of a larger watershed fed by highland areas such as Igourdane. The falls are a natural wonder and are truly something to behold and yet they represent so much more. Tourism has blossomed around the falls with restaurants, tea shops, craft and antiques shops studding the terraces and paths around the water. On the day we visited the vast majority of tourists were Moroccan with a few visitors from elsewhere.

This highlights how interconnected places like Ouzoude and Igourdane are when considering permaculture design over larger areas, ecologically and economically. These centres of human activity are interdependent and it is our job as permaculture designers to cultivate the awareness of such relationships and their relevance to the designs we are engaged with. A real highlight of the course came at the beginning of the second week. The journey to Igourdane was a transformative and emotional experience, a real turning point. The students got to tread in the footsteps of the villagers by taking the route they take to fetch water down the mountain and back albeit in reverse.

We held a morning session and after another lip-smacking lunch, this time under venerable shade of the carob elders, we set off on foot, on mules and donkeys for the road into the mountains. Marwane had engaged the services of a water diviner with a track record of locating water for agribusinesses. He was to locate the place we could drill to find potable water. He was an elderly yet ageless, spritely man full of laughter. He always had a smile lurking behind every other expression and a roguish twinkle in his eyes. He took off ahead on a donkey before we set off, we wouldn’t see him again till we reached Igourdane some hours later, where he greeted us with the villagers as if he were the tortoise and we were the hares. The journey to Igourdane: dried up river bed and ruined Ksar

The way to Igourdane from the farm led through sparsely planted olive groves, a seasonal water course and a dried up river bed, before we reached the road itself – a rough limestone track that would allow two pannier laden donkeys to pass each other comfortably. The track climbed gently higher before turning in the twisting hairpin bends of a mountain path. The journey to Igourdane: Traditional buildings

I rode a mule up the mountain having only ridden camels before. I actually did very well all things considered. Advice on how to ride comfortably from the others was just as well as my mule refused to let the pace be set by the other animals and took me off a fair way ahead of the rest of our train. I assumed he wanted to be rid of such a heavy burden as quickly as possible.

As the path lifted us steeply out of the foothills, allowing us a wider view of mountains, the stone track was patterned by water and covered with small stones and scree. I fell in such a rhythm with the mule that using the movement of my body I was willing each step he took to be sure and firm, as every now and then he would slip on pebbles and the polished rock before correcting himself without breaking the rhythm of his doleful stride.

It was an incredibly hot and arduous journey for those of us uninitiated with travelling through mountains (not including Dave of course). However it was the ideal way to impress upon the students and me, as to what life was really like for the people of Igourdane, to tread in their footsteps even just a little, to put ourselves in their position, to try and understand.

As the path levelled out, dwellings, carob and olive trees came into view. Sadly the first house we passed belonged to a family who had had to leave the area, mainly due to a lack of potable water. It was not long before children appeared from here and there, hollering news of our arrival through cupped hands and thus, thanks to the Berber telegraph Igourdane knew our exact whereabouts and estimated time of arrival. Faces familiar and new greeted us and our caravan and led us to the shade of ancient carob trees that had been planted long ago in the shape of a horseshoe – the roots of which had been mounded up with rocks to form a shady and cool corral for stock. The welcoming party consisted of the local men, farmers, boys and elders. We exchanged warm greetings before resting and taking stock of the place we had all been thinking of for so long; in my case for well over a year. Igourdane dam. Heavier than usual seasonal rains have given a
false impression here. This was taken in May. By August this will be dry.
As will the surrounding land. Just look at that unused catchment above….

The village consists of homesteads and house clusters dotted about terraces and plateaus amidst dry-stoned walled fields of barley, wheat, lentils, olives and carobs. The buildings are constructed out of stone and pisé with traditional roofs made of long poles laid over modular square rooms and piled with earth and sods with grass growing above. 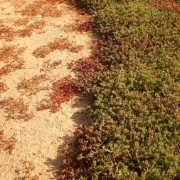 So You Want to be a Permaculture Designer! What’s Stopping You?