He’s lean, he’s mean, and he knows what he wants. It’s Cantankerous Frank, stripped down to his 25-or-so year old vest, brandishing a shovel, and holding firm against the not-so-super markets. The good news is that allotment farming in some places is more than popular now. From the UK’s Independent:

Councils have been urged to address a “chronic shortage” in the number of allotments being allocated by urban developers as demand for the plots of land reaches unprecedented highs.

The Local Government Association (LGA), which represents more than 400 councils in England and Wales, says that 200,000 allotments – small plots of land which can be rented by individuals to cultivate their own herbs, fruit and vegetables – have been lost over the past 30 years.

But demand for the sites, which are usually rented for a small annual fee from local councils, has never been greater. The meteoric rise of organic food ranges, coupled with an increase in the number of environmentally minded people keen to grow their own produce, has resulted in waiting lists of up to 10 years in some parts of the country. – Independent

18-Day Compost – the Appliance of Science

The Caffeine Did It?

Get Into Farming (video) 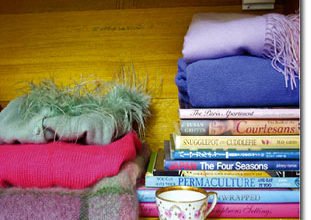