Note: This is Part II of a two-part series. Click here to read Part I. 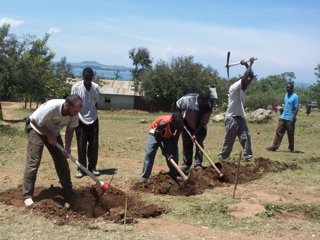 When we arrived in Tanzania, just as when we arrive in most third world countries to do this kind of work, the most serious issues to deal with initially are firstly sanitation, toilet systems, then drinking water, then fire wood systems or sustainable fuel systems, then diverse interactive food production designs.

Tanzania was the same. We stayed in the same town of Musoma where we taught the course regularly visiting the main proposed project site in a village called Kinesi which is 45 minutes by taxi boat across Lake Victoria. This is where the NGO Global Resource Alliance main work focus is situated.

The PDC course was conducted in Swahili which has a lot of Arabic in it and so I could understand some of the Arabic words that were spoken. 40% of the Tanzanian population is Muslim and having worked in a lot of Muslim countries, understanding the culture was therefore easy for me. This helped me relate to the students and the local people in the area.

As many of the students were from Kinesi village that is where we set about to design the project site for demonstration and education. That site is now being inplemented.

There are other sites that are already running local education schools in Musoma and they are now going to be teaching permaculture. Kinesi village is next to the lake but opposite from Musoma which is the main town in the region which is home to 155,000 people on
the shore of lake.

One of the villages away from the lake, is taking some more students and is also setting up an education site and demonstration centre also. This is the other demonstration site. It is different because it is 8km away from the lake due to serious clean drinking water access although it does have a dam which was built by the British in 1953. It was built by hand and is still working well. The problem with the dam is that it has not been well maintained because it is surrounded by water weed and although the locals could build more dams, no one has taught them. 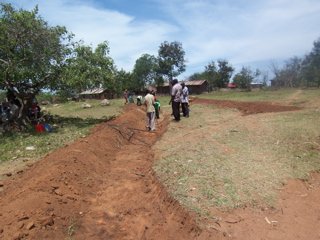 I could speculate that the reasons no more dams have been built may be that the locals may have been told they would not be capable of building them without outside help. The real reason remains a mystery.

We can however, train people to design quite complex water harvesting systems which would connect swales and dams through catchments and supply endless availablity for drinking water and irrigation.

Almost everybody is using latrine toilets which in the wet season overflow anywhere and everywhere, including into Lake Victoria. The extreme danger from this is what causes so many children in particular to contract cholera, typhoid and other fatally infectious diseases. The obvious solution to removing the problem of fecal matter getting into the drinking water is to build dry compost toilets which
are unaffected during the wet season and which anyone with the smallest amount of rudimentary construction skills can build themselves. We have given the locals of Kinesi multiple plans with instructions of how to build and maintain these toilets.

When I asked the class what sort of toilets they currently had, there was much laughter and I didn’t understand what they were laughing at. Clearly the translater was not passing on the joke to me. Finally he explained to me that they were describing what they called “flying toilets” which, it turned out were plastic bags in which people had “relieved themselves” and then thown the bags out of the windows. This also happens in the towns!

Still on the theme of waste in Kinesi, we have designed very simple grey water systems so that all waste water from households can be put to productive use using simple gravel reed beds that anyone can build and the final outlet of the water goes to deep mulch banana circles. 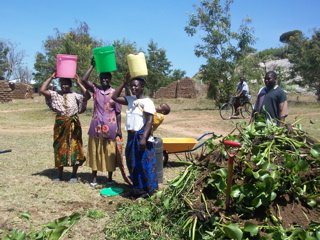 Where possible, roof water catchment systems with tanks have been explained and will be demonstrated. We have also taught how compost can be constructed in 18 days using organic waste, particularly incorporating the ever present water hyacinth from the lake.

The presence of so much water hyacynth around the lake and waterways in the area is indicative of leaching from the land into the lake, so by removing and composting it and returning it to the soil as an organic production system, the problem of the hyacynth and the leaching becomes their own solution a classic permaculture example of the problem being its own solution!”

Many foreign NGO’S are working to eradicate water hyacynth without seeing it as part of the problem and the solution and don’t’ see it as being of any benefit to the local people whatsoever. If we use herbicide or genetically engineered insects to remove hyacynth, we lose the last chance of returning the nutrient from the leaching from the hyacynth back to the land.

To extend the potential of organic fertiliser, we constructed simple compost tea oxygenation systems where the compost tea can be produced with a manual pump as many people don’t have electricity in the villages.

Another major problem is deforestation for fire wood and charcoal which is the main fuel for the entire populaton. Where the villages stretch across the country there is no natural forest left. All the forests have been denuded to make fire wood or charcoal with no thought of regeneration of those forests.

We recommended the design of fuel wood forests which can have multiple functions, so that they will

If these tree belts are designed on contour, in harmony with water harvesting earthworks, they will not only stabilise but also greatly enhance the local food production systems. A demonstration forest of this type is being established in Kinesi right now.

We will also be demonstrating energy efficient tropical housing through orientating the buildings to the wind, well shaded, most commomly made out of mudbrick or fired brick depending on personal choice or afforability. We explained the importance of good insect screening to reduce malaria problems. The malaria issue is a serious one as over 25% of the population have the disease. 75% of the population who live by the lake have malaria. The mosquitos however are not breeding in the lake because of the abundance of fish which eat the larvae.
Instead they are breeding in all the waste water stagnating or flowing from the houses. It was easy to demonstrate this to the class. Leaving a saucer of water on the window sill overnight was enough for them to see the mosquito wrigglers in there the next day, not rocket science, but enough to drive home the importance of not only good household insect screening but of good water management in the village and surrounds. 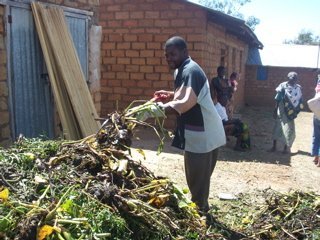 Also with housing improvements, we explained about the importance of “limited thermal mass”, the advantage of roof catchment tanks and the advantages of outside kitchens to eliminate interior household heat. Again regarding heat management, we taught the class about the value of trellis shade surroundings to cool the housing down.

After this we analysied how many different crops and fruit trees we could grow and we came up with a very large diverse list, vegebales from the past and fruit that was possible. And with good design and good water harvesting with on contour soakage systems, mulch and compost there is no reason why they couldn’t have abundant fresh food production and a healthy diet.

With the right integration of animals and nitrogen fixing species, the soil could be improved and become more fertile all the time rather than less fertile. And the food would not only be organic but highly nutritious and diverse.

A combination of all these solutions would mean that the people would have greatly boosted immunity, better health and stamina to achieve more, require less western aid, would no longer need medically subsidised aid and studies have proven that they would also naturally moderate their population. Currently one third of all children die and they believe that is “normal”.

The project is now in place and being established with Australian and international Permaculture PDC students helping the locals implement the first remediation systems as demonstration sites. We are looking for more people who have done a PDC and are prepared to maintain the project and others like it through a “tag team” system, who have the enthusiasm to complete these demonstration sites and
extend the education sites.

The Global Resource Alliance will contribute accommodation and food costs to these volunteers. PRI is prepared to provide the specific training for these projects and ongoing mentoring through email and digital photograph reference.

This is ideally the way it should go every time and what we endeavour to leave behind is a viable and impactful demonstration education centre.

The challenge of Tanzania