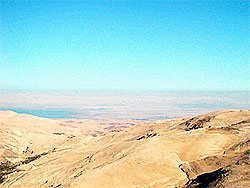 Geoff Lawton is an internationally renowned Permaculture teacher and design consultant. His story in the Middle East is a success story, rare in the politically tumultuous climate which rules the lives of many in this part of the globe. He has solved and offered positive solutions to many of the environmental problems typical to the Middle east; water shortage, highly salted land, agricultural production, and unsustainable housing.

Exporting this system to over 17 different countries around the world he is part of a growing global movement which uses permaculture techniques to provide human needs in an environmentally responsible way. His work has led him all around the world and has focused on relieving drastic environmental problems in many places of great need and often conflict.

Commissioned in August 2000 by a Japanese aid organization to work in association with a Jordanian aid organization Geoff’s first visit involved the design of a flat 10 acre, highly salted, very alkaline, piece of land in the Dead Sea Valley, 400m below sea level and just a few kilometers from the Palestinian border. The aim was to demonstrate sustainable farming practices. A plan was drawn up and accepted and arrangements were made for them to return in December during the cooler time of the year.

During the December visit they each taught the 72 hour Permaculture Design Certificate course. Also on this trip they directed the installation of permaculture earthworks, which included the construction of one and a half kilometers of water harvesting swales, (contour ditches, with an un-compacted earth mound on the lower side which is typically used as a tree growing system). As well, a small in surface area, but deep dam was also installed as part of the design. This method of dam construction is essential in an area where evaporation is extreme. Before Geoff’s departure, Instructions were left to fence the site, as the area is surrounded by the free ranging goats and sheep of the Bedouin people and local farmers. Instructions were also left for drip irrigation to be installed under layers of thick organic mulch, this technique is so necessary in climates were evaporation is high and salted land is the consequence. Once the fencing and irrigation was in place a diversity of fruit trees were planted, and for every fruit tree, three fast growing pioneer and nitrogen fixing trees were also planted. This design mimics the natural eco systems, from which permaculture draws its wisdom. 1,510 trees were initially planted and only seven died, one because of a blocked dripper and 6 were sacrificial and planted with no mulch to prove to the skeptics that mulching was a must.

The local agricultural department described the land as useless for any serious production. With a soil salt level of 5,000ppm, the only available irrigation water at 4,100 ppm salt content, and a pH of 9.5, even10 in places it was considered impossible to grow figs and many other fruit trees and crops.

With the local project workers well educated in permaculture design, Geoff’s instructions were carefully followed and on their next return visit, four months after the first trees were planted, the results were very exciting. Figs were growing well and fruiting, so were guavas and pomegranates, some of the pioneer trees had reached two meters in height and the general greening up of the site was very encouraging. These results indicated that the salt levels must have dropped, pH must have also dropped and soil fertility must have improved. The Agriculture Department were invited back to do further soil tests and the results were incredibly exciting even to Geoff.

The good results would normally indicate a large use of sweet water, but on the contrary, the high cost of transporting sweet water on to site is not only against permaculture principles, but is financially out of reach to the average farmer and also too costly for our own budget. We used the same salted water that local farmers have to irrigate with, but because of good design only 1/5th the amofunt of water was used compared to that of a farm similar in size. The effects achieved were a mystery to the local people, and to the agricultural department, and a great deal of attention from all sorts of individuals and authorities resulted. The soil had come alive, the lifecycles within the soil were starting to lock up the salt, the process of soil creation had begun, and not only had pH and salt dropped dramatically, the pale sandy soil was turning deep brown with the creation of hummus, Geoff found himself explaining this process time and time again to satisfy the astonishment of those who had not believed he could succeed.

August 2001 was scheduled for their third visit.

A second set of courses were taught with much enthusiasm and many local farmers began to use permaculture techniques and inquire how we had achieved such positive results on such poor land. But the site had to stand its first real test, the extreme climatic conditions of the intense dry season, which it did remarkably well, and as the rains began again and the temperatures cooled in October 2001 planting was recommenced and the rapid growth continued, with the best annual rainfall in twenty years of 200mm. In December 2001 the irrigation was switched off for 1 month, an incredible test of strength for such a young system. There was some slight stress in the guavas but no losses and no negative effect on the whole system. The rapid growth continued a crop of winter Barley and a commercial crop of organic onions was grown between the swales with astounding success and the total site turned green.

Geoff returned in April 2002 exactly one year after the first plantings were commenced. The conflict in Palestine was now extremely serious, Jericho situated on the west bank is clearly seen from the demonstration site, and with the high profile of military forces patrolling the area, and regular heavily armed check points, there is a constant reminder that this is an area of intense conflict, and human suffering.

The farm though was in very good shape, the agricultural department tests indicated no salt in some places on the site and a pH of 7.5. The farm was beginning to resemble a small forest along the contour lines of the water harvesting systems. An education center was being constructed using traditional design and materials, with a self cooling system incorporated in to the design needing no polluting energy. Instead wind chimneys with a charcoal evaporation system are being installed to demonstrate low cost and minimum energy housing design for the local people.

All of this had attracted much attention from many professional bodies of agricultural engineers, environmental organizations, schools, and the Jordanian department of agriculture, this led to Geoff being invited on a lecture tour to all these different sectors, this in turn created further interest and a calling for more PDCs in this country. The Agriculture Department has now made the decision to set up an organic research project, which Geoff was invited to consult on.

Use of permaculture under salinity and drought conditions